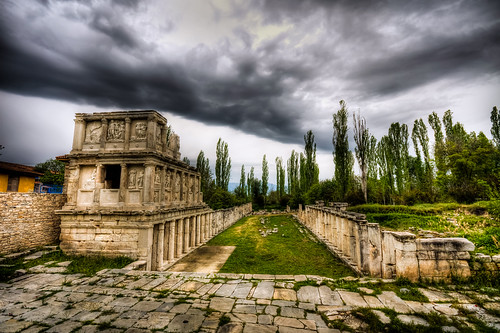 Please don’t use this image on websites, blogs or other media
without my explicit permission.
© All rights reserved
Contact: [email protected]

The site of Aphrodisias has been sacred since as early as 5,800 BC, when Neolithic farmers came here to worship the Mother Goddess of fertility and crops.
In Greek times, the site was dedicated to Aphrodite, the goddess of love and fertility. The site was named Aphrodisias during the 2nd century BC and the great Temple of Aphrodite was built in the 1st century AD.
The Sebastion, discovered in 1979, was a Temple of Augustus used for performing the cult of the Roman emperor (Sebastos is the Greek form of Augustus). The temple consisted of two porticoes (80 m long) made of half-columns and a ceremonial way (14 m wide). At the western end was a gate or propylon opening on to the street. All that remains of the temple are the foundations, a few column bases, Corinthian style capitals and architrave blocks. However, around the porticoes a great quantity of reliefs and decorative panels have been discovered.